Latest Knowledge
Botox: Cosmetic and Medical Uses in New Orleans
8 Tips to Set Professionals Goals and Plan...
Business Energy Deemed Tariffs: What You Should Know
MIXING UP THE MARKETING WITH A GLOBAL EYE...
3D Printing for Jewelry Production
How to Spy on Android Phone without Installing...
200 Basic Computer Questions | K.G Level
Should You Consider Crowdsourcing for Your Business?
Choosing the Right Enrichment Programs for Your Child
The 9 Most Important Facts About Australian Made...
Home Guide How Long Does it Take to Become a Pro at Cell Phone Repair?
GuideHow ToTechnology

How Long Does it Take to Become a Pro at Cell Phone Repair?

Cell phone repair is by no means a walk in the park. And the learning curve associated with the venture is steep. A mountain, rather, that only the determined hiker can surmount.

Here, I speak from the experience gained through 35 years in the field. You could say that I’m a domain veteran, even. Starting with manual fixes, I eventually got hooked on cell phone store software.

You can’t blame a long-time worker for wanting to automate the process. Particularly those workflow parts that entail repetition. A downing monotony that is oppressive.

Nowadays, I don’t use my hands much to salvage broken phones. But I do engage in consultancy and advocacy work. And what I can confidently state on the evolution of the trade is this:

Courtesy, of course, of micro-circuitry advancements.

Which, of course, translates into a nightmare for micro-soldering experts. The field pros who risk their necks to make ends meet. Because the board wires and valves only keep getting slippier. Calling for the deployment of more refined techniques – more minute machines.

Pro-ship, then, and in many ways, is a subjective enterprise.

It only suits individuals who boast a certain measure of persistence. The attribute of not giving up when the going gets tough. And it is only after this season has passed that the sufferer becomes a polished gem. Ready to take on whichever device-rescuing operation comes their way. Not resorting to repair management software for an easy, quick fix.

Most people, however, are not cut out for it. It’s a common sight to see young, aspiring techs quit after two or three years.

They are not amenable, specifically, to the horrible work/life imbalance in store. Nor are they open to the requirement of devoting their days to the craft.

This disposition, as expected, becomes problematic after a while.

Being a ‘Pro’ is Mostly a Consensus Designation

The lack of field centralization also makes the designation a ‘difficult achievement’.

There are no de juro trade certifying bodies, as such, in electronics repair. Nor any universities that provide hands-on degrees to the effect.

Cell phone store software companies, even, are negligent on this front. Because, unlike other tech concerns, they don’t offer any accreditation regimens.

The only arbiter of specialization, here, is consensus. Or market consensus, if I were to be precise.

The sort of entrenchment/good reputation that comes after years of devoted service. Reached when the repair tech has successfully fixed a large majority of assignments. Belittled, as it were, by only a few failures.

It is at this stage that customers popularize the said individual as being a ‘professional’. Someone trusted to get the job done; being deserving of monetary payment.

Many pros eventually go on to take large-scale (bulk) fixing contracts during their advanced career stages. At this point, they’re mostly concerned with supervising their peers and field up-comers. Guiding the process that makes for quality repairs.

Must Read: 10 Best Parental Spy Apps to Keep an Eye on Child’s Phone

But if I were to Stipulate a Timeline…

I would posit it somewhere in the 10-20 years frame. And the reasoning behind this is simple:

This is the normal time it takes for any industry purveyor to size up the patterns in repair. Take stock of how device innards change with each branded outing. Analysis that comes followed by shifts in repair protocols. The techniques used to salvage customer submits (inclusive of new tech usage).

It’s also worth mentioning that over this period, techs can only ever hope to gain some level of niche mastery. 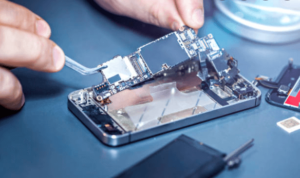 What I mean by this is repair dexterity in the face of specific brand-line breakages. I haven’t even gone over the entire cell phone store software discussion (a learning necessity, these days, that can make or break careers).

Sure, the said expert can make successful repair runs on other devices. But the rate of complete triumph would be less in this case. And by ‘complete’, I mean a ‘restoration to the original state’.

In the appraisal books of many (including myself), it is only with the latter label that a repair run becomes ‘sound’. Qualitatively-speaking.

In the real world, only very few techs meet this stringent standard.

The rest – at best – only ever succeed at drawing near this elusive metric.

Must Read: Should You Buy the Latest Apple iPhone?

No – the Tutorials Alone Won’t Cut It!

The modern internet, of course, is rife with tutorials. Entire courses geared to teach the trade within days. Sometimes, they come with even more preposterous claims. Consider a recent outing – which I won’t name – that promises 3-hour-long didactic spells.

Now, it shouldn’t take a rocket scientist to explain that such recourses won’t cut it. Not even barely – if quality and respectability are anywhere on the agenda.

At best, these regimens only ever achieve success at one thing:

To trivialize the whole notion of repair as a field for amateurs. A population orientation, sadly, that results in a lowering of aggregate compensation amounts. Regressed, often, to the point of non-competitive injustice. 😔

Being versed in the intricacies of even the best repair shop software also provides no popular guarantee of expertise. It simply indicates the learning tech’s adroitness in using the interface to process business workflows.

The only way forward for anyone hoping to excel in the field is ‘practice’!

Just like brain surgery, the work doesn’t come naturally to anyone. But with experience, its rigours do become easy. Thanks to the human mind’s ability to adapt and entrench particular thoughts or actions as habits (the realm of reflex).

The above is my take on the subject.

You’re welcome to disagree with me if you think some of my points are unwarranted – bless the comments field!

I can’t, obviously, give concrete empirical evidence to back up my anecdotal claims. But I can say that the concerns raised in this piece will resonate with many who’ve been in my situation.

And so it is on this solemn note that I bid the reader adieu – until we next meet (on the screen’s opposite ends).

How Small Businesses Can Take Advantage Of Instagram Reels