Latest Knowledge
The Power of CPD Events: How They Can...
How to Choose a Home Insurance Policy
10 Important Things To Know When Involving Technology...
How Pod Team Can Improve the Potential of...
What You Should Look Out For When Analyzing...
The Best Call of Duty Warzone 2.0 Cheats...
The Impact of DeFi Wallet on the financial...
4 Advantages of Influencer Management
3 Small Business Ideas for Tech-Savvy Entrepreneurs
The Story Of Camp Lejeune: How Veterans Became...
Home Casino 5 Technologies that are Used in Gaming Development
CasinoGamesGaming

5 Technologies that are Used in Gaming Development

There has been a massive advancement in technology in the last 10 years that has changed the way we live our lives forever. From the growth of the internet to hardware development breakthroughs allowing us to keep extremely powerful devices in our pockets, we rely on technology daily.

With things like the introduction of virtual reality headsets and motion control to our households, the gaming experience has never felt so real. These new technologies have also improved our experiences in playing games online. Whether you are using your phone to play Jackpot Slots on the bus to work or teaming up with your friends worldwide to play your favorite FPS shooter on your PC, you can be assured that new technologies are being used to make it all possible.

Here are some of the most influential and exciting technologies that are being used in gaming development to improve the experience for gamers around the globe.

Augmented reality is a powerful technology that we are seeing used more and more in the gaming industry. Pokemon Go is probably the most popular and recent game that utilized augmented reality to create an immersive experience for gamers. The potential for the incorporation of augmented reality into the gaming experience is extremely exciting. The ability to be transported into another world without having to go anywhere is very powerful.

Augmented reality is expected to be used more frequently in the development of games. Some innovative ideas that utilize the power of augmented reality include a theme park that provides an interactive experience for the player as well as virtual events that you and your friends can take part in from wherever you like.

Also Read This: 5 Examples of Using Augmented Reality That You Didn’t Even Know Existed

Virtual reality technology has been around longer than augmented reality. It has been used for real-life applications in things such as medical procedures and assisting those who gain the ability to walk again after an accident. The introduction of VR technology into the gaming industry transformed the way people play. 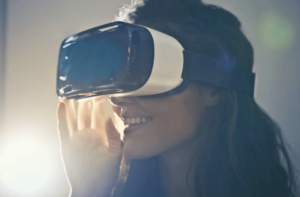 Advancements have made it affordable for people to use virtual reality in their homes. It is still a relatively new tech but has huge potential for increasing the experience people have whilst playing their favorite games. By just putting on a headset, you can be transported to a completely different world. The improvements in connectivity allow players to team up with people on the other side of the world so they can share a unique experience.

Looking to the future, the possibilities for virtual reality in games are endless. Eliminating the nauseous effects that the headsets can cause will enable people to play for longer and truly get lost in the power of VR.

Voice control is a useful technology that allows us to control things in our life with just our mouths. It is most useful for things like making calls and replying to texts when hands are full or whilst driving. It is also used more and more in smart homes to control lights and sound systems.

The use of voice control in the development of games has not been fully explored, but games such as Tom Clancy have tried to integrate it into their experience. In the future, there is some real potential for voice control to play a major role in games. For example, as technology advances, especially AI, there is a possibility that you may be able to have entire conversations that affect the storyline of a game.

Motion control is another interesting technology that has yet to be fully incorporated into the development of games. Nintendo Wii was probably the most popular platform to use it in games such as Wii Bowling and tennis. It allowed players to use their arms to control the accuracy and speed of the projectiles being thrown or hit.

It’s unique and has yet to be used to its full potential and hasn’t been used with anywhere near as much success since the release of Wii Sports by Nintendo. This doesn’t mean that it won’t be utilized in the future for the development of games. It is most definitely something that has a lot of promise, especially when used with other new developments such as virtual and augmented reality.

Improvements in technology have allowed devices to become smaller and more powerful than ever. People are capable of having a unique gaming experience using just their mobile phones. The Nintendo Switch allows players to go from a big monitor display to a handheld device with just a click of a button. The portability of devices used in gaming has taken away the need for a big expensive PC set up at home and has allowed players to join in the fun wherever and whenever they like.

Legitimate Reasons for Investing in Bitcoin in 2022!

Everything You Need to Know About PaydayNow Direct Lenders Loans

5 Relaxing Things to Do While Playing Online...

Get The Ultimate Gaming Experience By Using Proxies