Latest Knowledge
Experience the High Life with These Top Luxury...
The Benefits of Utilizing a Professional Best Essay...
A Guide to 8 Bong Shapes and Which...
How to Achieve Spotify Student Discount Without Being...
The Power of CPD Events: How They Can...
How to Choose a Home Insurance Policy
10 Important Things To Know When Involving Technology...
How Pod Team Can Improve the Potential of...
What You Should Look Out For When Analyzing...
The Best Call of Duty Warzone 2.0 Cheats...
Home Apps Understanding Pros and Cons of No-Code App Development
AppsGuideTechnology

No-code app development is a fairly new type of web development that allows people who are not well-versed in programming to create their software. Rather than writing code, the user is prompted to develop their software by using a graphical user interface.

No-code app development was created in response to the rise of the no-code movement. This group’s motive is to enable more people to create their own websites and apps in various ways, as they believe that technology should enable and facilitate creation. Limiting app development to coding alienates those who can’t learn it.

Although it’s new, no-code app development has swiftly been introduced to the technology industry. It’s disrupting the landscape, offering a challenging competitor to those who have spent long hours studying to understand and implement code. Google recently purchased Appsheet, meaning they see a future for no-code development. 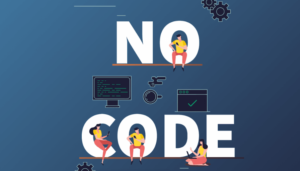 App Can Be Developed Much Faster

No-code app development offers a faster path to app launching. Without the limitations of code, you can train anyone on your team to create an app through no-code app development. The process of training is much easier and the period much shorter than software developers learning how to code.

There aren’t any languages to learn, no-code development interfaces have drag and drop sections, incorporate AI technology, and logical visual modeling. By going with a no-code development option for your app, you’ll have the advantage of getting to market with your application before your competitors.

Reduce Your IT Costs

Technology teams tend to be one of the most expensive teams within a business. Software developers spend long hours getting degrees to perfect their craft, and the continuation of those long days is at their new jobs where they are responsible for keeping the code clean and running smoothly. They expect their salary to reflect that work.

Changes Can Be Made Easily

One of the limitations of coding is that you can’t change the functionality of your app very easily. You have to open the code, understand the language, and know exactly how to fix the problem to solve it quickly. With no-code app development, you can make changes and tweaks to your app quickly through the development platform of your choice. Simply log on to whatever host you’ve chosen for your no-code application, and make the changes. Once you save your progress, your changes will appear on the application.

Not Many Features Or Controls

While coding can be timely and offer more challenges than no-code development, it has more features and controls. Experienced developers understand how to leverage programming languages to their fullest potential; they understand how to use a Kubernetes Docker registry from software companies like JFrog and how to use continuous integration and delivery to streamline software development. No-code solutions, by contrast, inhibit the creator.

There’s limited room for creativity when using no-code app development. The customizations will be limited to what the host of your no-code app development platform offers to you. For instance, there may not be a color or font available to you that you’re looking for, whereas with coding you could find a workaround to include it within your application.

No-code app development is geared right now towards smaller businesses, entrepreneurs, and small projects. Even though it’s suitable for some businesses, it’s still in the early stages of its development. Some larger businesses have found they can use a mixture of no-code and coding to develop their applications.

THE MOST IMPORTANT CRITERIA OF AN E-COMMERCE PLATFORM: WHICH PLATFORM TO CHOOSE

How to Avoid PST File Corruption after Renaming or Moving