Latest Knowledge
What Is Office Hoteling Software? And How To...
Make Your College Experience Unforgettable: Top 10 Things...
8 Things to Include in Your Campus Visit...
What is it that makes Filmora the best...
Solve Wireshark Not Showing Interfaces Error | Easy...
The Most clever Complaints We’ve Looked into Zorb...
How Important is Web Design For Your Business...
Empirical Evidence and Consequences of Bitcoin as a...
Experts Share: The Secrets of Alcoholism Rehab
Why Everybody Needs Identity Theft Protection
Home Guide Collaborative Robots and their applications
GuideTechnology

Collaborative Robots and their applications

The mere thought of robots taking over the most menial jobs was once but a far-fetched dream. However, in the ’50s, that idea started to become more of a reality. The first commercial robots were created back in ’56 by Engineers George Devol and Joseph Engelberger. That same year, KUKA was introduced in Germany to be used in the welding system.

A few years later, the FAMULUS robot was introduced. This was a robot whose axes were electro-mechanically driven. It had six axes that were designed to mimic a human arm’s mechanics and motion. After this inception, there has been a rapid growth of the use of robotic arms in welding and assembly lines of manufacturing firms.

All these machines have one thing in common; they can do their jobs safely as they work far from human workers. This separation was caused by their massive size, which has the potential of causing grave injury to human workers. These robots have since evolved into what we now know as collaborative robots.

What are Collaborative robots?

Also known as cobots, collaborative robots are incarnations of manufacturing robots that have been designed to work with humans as opposed to how they were working in isolation back in the day. 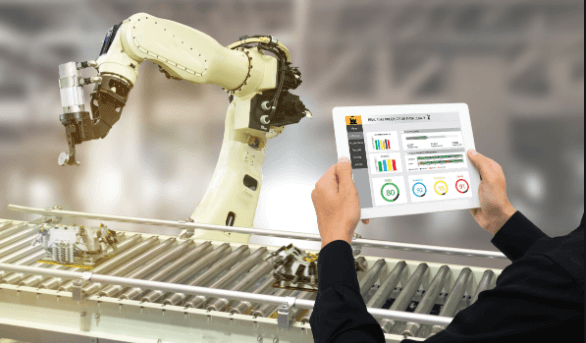 The good thing is that cobots are as effective as their bigger counterparts and then have the added advantage of sharing space. Cobots are also not entirely autonomous, which means they still need human operators to a certain extent. Unlike other robots, which solely rely on programmers to know what to do, cobots learn by example.

Operators can physically control its movement taking it through the assigned tasks. After this, the robot will be able to remember the task it performed until completion. It will perform the same tasks over and over again with crystal-clear precision.

Application of Cobots in manufacturing

Cobots can be applied in many different operations more popularly used for manufacturing and assembly. On estimate, there are currently about 74 robots for every 10,000 employees on earth. Experts expect this number to grow by 13% in the coming year. This shows just how big a role cobots currently play in the manufacturing world.

These machines now also perform high-precision tasks. While humans will be able to accomplish the jobs assigned to cobots, they tend to get bored with repetitive motions. This, in turn, affects the quality of production.

Collaborative robots are also quite valuable in situations where human workers can be injured. There are also some instances where these machines take over the not-so ergonomic tasks.

How collaborative are these robots?

There’s a high likelihood that all humans working in a manufacturing plant will start working alongside robots in the near future. Other than in manufacturing, you may also start seeing cobots operating in some entry-level jobs. For example, bartending and food service. Some companies can also use these robots to act as surgical assistants and also to pick plantations.
Depending on the specific industry, here is how a day alongside a cobot will look like:
• Arrive in the office and boot up the collaborative robot. You’ll then be able to view all assigned tasks and monitor the              operations of the robot all day.
• You can also do other more important jobs and also assign repetitive tasks to the robot. You will also occasionally                     check in on the robot, confirming if there are any updates that need to be done in the programming.
• Once the day comes to an end, and if there aren’t any other shifts past yours, you will shut the robot off and call it a                day.
There is, however, fear that robots might replace human workers, thus rendering all humans jobless. This is not the case because collaborative robots have been designed to be able to work alongside humans. All they do is help with repetitive jobs, thereby giving human workers more room to focus on other important tasks.

Why you should start using cobots

Unlike traditional robots, cobots can be programmed even in half an hour. They come with user-friendly mobile applications and software. Moreover, cobots are able to receive learn new movements with easy and repeat them with perfect precision.

Collaborative robots can be used in many different applications. As such, you can easily add new tasks to the robot. These robots can also perform the same tasks for 40 hours each week and still perform different tasks daily. This multi-tasking and flexibility ability makes it possible for employers to hire cobots as temporary workers.

3. High levels of accuracy and consistency

As compared to human workers, cobots offer unmatched accuracy. For example, some robots have a 0.1mm action-performing accuracy. Moreover, robots don’t deviate from their assigned tasks and won’t lose momentum along the way. For example, when they are assigned to tighten screws, the same pressure and tension will be applied repeatedly, thus ensuring quality consistency.

4. Positive effects to your employees

As earlier mentioned, cobots are here to work with human workers and not take their jobs. That is why they are also termed people-focused robots. By refining the work, human workers used to do, repetitive, monotonous, boring, unsafe, and dirty jobs are given to these robots. For instance, a robot will be tasked with tightening the screws then human workers will complete the production a step ahead of that screwing process. This will create a positive effect on your employees, making them happier in their work.

The idea behind robotization is to optimize some processes. This is to mean that the maximum goal will be achieved using minimal costs. There will be minimal errors, employees will have other jobs to focus on, and productivity will be increased.

Over the last couple of years, the manufacturing industry has steadily grown more so in the use of robotics. Even though equipping and setting up a collaborative robot is a big investment, it will be cheaper in the long run. You will eventually experience a better return on investment.

4 Marketing KPIs Your Company Should Be Measuring

How Important is Web Design For Your Business...

How Important is Web Design For...