Latest Knowledge
Experience the High Life with These Top Luxury...
The Benefits of Utilizing a Professional Best Essay...
A Guide to 8 Bong Shapes and Which...
How to Achieve Spotify Student Discount Without Being...
The Power of CPD Events: How They Can...
How to Choose a Home Insurance Policy
10 Important Things To Know When Involving Technology...
How Pod Team Can Improve the Potential of...
What You Should Look Out For When Analyzing...
The Best Call of Duty Warzone 2.0 Cheats...
Home Guide 3 Most Common Water-Related Hazards That You Must Avoid
Guide

3 Most Common Water-Related Hazards That You Must Avoid

Water is one of the most crucial natural resources for life to grow and sustain. It provides us with drinking water and irrigation for crops, and it can also be used for recreation. However, water also has the potential to become a hazard when humans or animals contaminate it or if it is not properly managed.

In addition to causing human illness and death, unsafe drinking water can lead to environmental problems such as degradation of the ecosystem and loss of biodiversity.

This article will discuss the three most common types of water-related hazards that you must avoid when using water in your daily life.

Contaminated drinking water is one of the most common water-related hazards in the world.

Contaminated drinking water can come from many sources, including rivers, lakes, ponds, and wells. It can also come from municipal water supplies that have been contaminated by sewage overflow or runoff from farms that use pesticides and fertilizers.

According to WHO, at least 2 billion people throughout the world consume water that has been tainted with feces. It can lead to a number of illnesses, including diarrhea and cholera, which can lead to death if untreated.

For instance, contaminated water at Camp Lejeune brought suffering to the masses, leaving some to experience chronic diseases while others had to lose their family members. The water was contaminated with harmful chemicals that led to diseases like Bladder cancer, Kidney cancer, Liver cancer, Multiple myeloma, and others to those who consumed it. The affected individuals are turning to Camp Lejeune Lawsuit for help and to get their rights.

In addition to being potentially fatal to humans, contaminated drinking water can also be harmful to other forms of life. For example, fish and other animals are extremely vulnerable when they swim in polluted waters because their gills absorb toxins more readily than humans’ lungs do.

Flooded areas can be extremely harmful to human health, and they can even cause death.

The most common reason for flooding is heavy rainfall over a short period of time and high tide conditions, which causes water levels to rise quickly and unexpectedly. 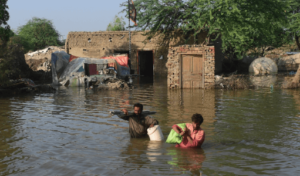 Flooded areas are especially dangerous because they contain high levels of bacteria and other contaminants, which can cause diseases such as typhoid fever and cholera if the contaminated water comes in contact with your skin or eyes. Flooded areas may also contain sharp objects that can injure you, so it is important to avoid all contact with them.

Roughly 34.2 million people were affected by floods in 2020 around the world, with some suffering injuries or losing their houses. This number, which has decreased by almost 88 percent from the 30-year peak reached in 1998, has remained largely constant in recent years.

When these floods happen in your community, it’s important that you stay safe by moving away from flooded areas as quickly as possible.

The U.S. Environmental Protection Agency’s most recent national water quality surveys show that more than one-third of our lakes and more than half of our rivers and streams are contaminated and unsafe for swimming, fishing, or drinking.

If you come across a polluted body of water, be sure to avoid contact with it. Never drink from or swim in polluted water bodies. If you are going to go near these types of bodies of water, always wear protective clothing such as gloves and masks when handling any items that may have been contaminated by this type of pollution so that you don’t absorb any harmful chemicals into your body through touch or inhalation.

Also Read This: How to Put Out a Fire Instantly | 5 Easy Ways

Water is an important part of our daily lives, but it can also be dangerous. We need water to live, but we also need to be careful around it. Water can be very dangerous if you don’t know what you’re doing. Don’t let a little water ruin your life. Avoid these common hazards and enjoy your time drinking, swimming, playing, and doing other activities with the most precious resource on the earth – water.

Why Should Pet Food Be the Top Priority for Pet Parents?