Latest Knowledge
Experience the High Life with These Top Luxury...
The Benefits of Utilizing a Professional Best Essay...
A Guide to 8 Bong Shapes and Which...
How to Achieve Spotify Student Discount Without Being...
The Power of CPD Events: How They Can...
How to Choose a Home Insurance Policy
10 Important Things To Know When Involving Technology...
How Pod Team Can Improve the Potential of...
What You Should Look Out For When Analyzing...
The Best Call of Duty Warzone 2.0 Cheats...
Home Digital Art Animation Cinema Complete Guide and techniques
Digital ArtGuideTechnology

Animation Cinema Guide: The Film d ‘ animation owes its birth to Charles-Emile Reynaud, the inventor of the Theatre Optique, a machine that projected on canvas, through a hall of mirrors, figures drawn on a paper roll, while the backgrounds on which they moved images were created thanks to a magic lantern.

The previous animation played at ten frames per second. The first screening took place in 1892, three years before the presentation to the public of the invention of the Lumière brothers.

At first, the animations concerned the movement of inanimate objects, such as Georges Méliès’ make-up films, then using the frame-by-frame (or single frame ) process he arrived at a more modern form of animated cinema.

The techniques in Animation Cinema

An example of traditional animation, a horse animated by rotoscoping from the nineteenth-century photos of Eadweard Muybridge

Since the advent of the projector and the camera, animation has been marked by the “frame by frame” technique, which consists of sliding one frame at a time in front of an upright camera.

Following this procedure, the filmmakers have ventured into the animation of the most diverse materials, from the classic animation on cellulose sheets to sandpaper or paint.

Stop motion animation (literally stop motion in English ) contains many techniques, which may seem completely different at first glance, but which in reality are very similar, only the material used to make the animations changes and some particular technical devices.

Usually, the object to be animated is photographed, made to make a slight movement and take another shot. The fast projected sequence of shots creates the impression of continuous movement.

The silhouettes used in animated cinema are black figures taken in profile (or more often according to an “Egyptian” perspective, which shows several points of view at the same time), usually cut on a metal sheet, which unlike paper is more robust and therefore more difficult to ruin; or on cardboard or finally by combining metal and cardboard. 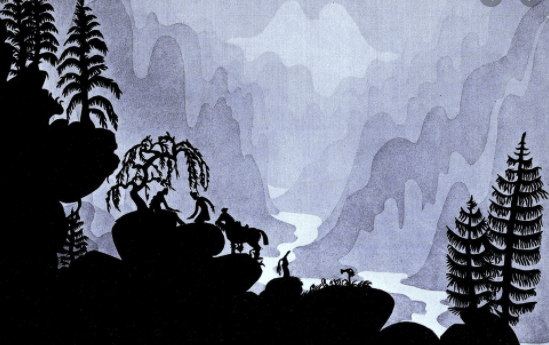 These silhouettes are not unique figurines but are composed of movable and replaceable joints to make animation work easier.

The silhouettes are placed on a horizontal and backlit work surface to give maximum opacity to the black and brightness to the colored backdrops and shot from above.

This technique was widely used by Lotte Reiniger and Noburō Ōfuji, which later fell into disuse, was taken up by Michel Ocelot to make the feature film Principi e Principesse.

This is a well-known technique of animation cinema, also recently used by Peter Lord to make Hens on the run. The plasticine is manipulated until the desired posture is obtained, a photo of the character is taken and the manipulation continues to obtain the next movement.

Peter Lord himself explained that in making Hens on the run the busts were made of silicone in order to avoid that they deform during the shooting phase.

In addition, countless heads and legs had been created to lighten the work in order to always have the most suitable posture available.

In any case, each time a character spoke, the mouth had to be animated in a different way so that the movement was synchronized with the recorded words.

Another well-known artist in Europe who creates animations in plasticine is Fusako Yusaki, a Japanese naturalized Italian, whose works are broadcast on Swiss television. The series about the little dog Peo was recently broadcast.