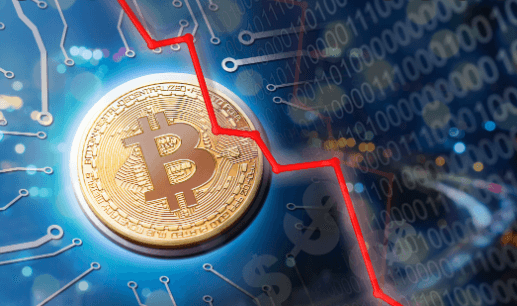 After culminating a relatively successful year for bitcoin trading in 2021, it was expected that by the beginning of 2022, the same upward trend that many fell in love with and invested in would continue to obtain profits from the fluctuations in the price of Bitcoin.

Unfortunately for many, the situation has been different, CRYPTOCURRENCIES DOWNbut this does not make the investment spirits end; due to a series of events that seem should not influence the commercialization of cryptocurrencies, they have managed to violate the digital financial market.

Market analyses have concluded that cryptocurrencies have decreased by around 30 percent, which is a value for investors that could even lead to a crypto winter.

Factors of the traditional financial market affect the digital market

The collapse of the leading cryptocurrency BITCOIN is the most alarming situation in recent months in the digital market.

This situation is attributed to several conditions that have wreaked havoc in this environment. However, they are not part of the digital market.

Rising interest rates, lack of control over inflation, an ongoing war, and some failures in creating crypto projects have all contributed to drastic drops in cryptocurrency prices.

The economic and financial situation that the United States is going through has been one of the critical points regarding the involution of the price of cryptocurrencies. However, the purpose of these digital assets is to contribute to the reduction of inflation and serve as financial instruments against the crisis.

From the economic and social perspective, cryptocurrencies have shown that they are vulnerable to trending news, so their valuation is constantly changing.

Such is the case of what is happening between Ukraine and Russia. This war situation affects not only the parties involved but also the entire environment, which is why when a confrontation arises; the countries’ finances and economy enter a recession.

This is where cryptocurrencies come in and make their participation, since blocking measures are generated to pressure the weapons and the confrontation to cease.

Not seeing results, both countries have adopted the use of cryptocurrencies as a financial tool to carry out the transactions and marketing operations that these two countries maintain with the rest of the world.

After this situation, everything significantly affected the value of Bitcoin, which has bottomed out by falling from a price of the maximum price registered in November of almost 60,000 dollars to be in May, touching 30,000 dollars.

Another factor that has a notable influence is the fall in the shares that make up the NASDAQ; consequently, the Fed’s statements affected all the elements of finance, only some in a more significant proportion than others.

The sale of digital assets is considered another cause that could have caused this difficult stage for Bitcoin and the rest of the cryptocurrencies since many users found themselves in the situation of selling to pay the corresponding national taxes.

Stability is not your best friend.

Cryptocurrencies have been characterized by being highly volatile and where the unity of supply and demand is relatively high, to the point that their values ​​can change in minutes without prior notice.

This digital financial market is one of the riskiest. Still, it usually grants its user’s benefits in a large proportion, which is why when trends tend to go down, many far-sighted investors, tend to acquire more cryptocurrencies.

This is to recover more capital at the end of the year when the upward trend has been quite considerable.

Volatility is an essential element of the financial markets. Some digital or traditional assets are exposed to them. That is where users when making movements, influence their percentage of the action.

Bitcoin has had a resounding variation to the point that it can be indicated that its valuation has decreased by almost 60%.

There are several situations, from simple ones such as a message on social networks from an influential businessman or the fact that a country reflects a position for or against cryptocurrencies, which will cause its market capitalization and value per unit to vary.

Many times these variations are incredible since cryptocurrencies are decentralized. Still, those who use them are the people who are part of the traditional market.

It only remains to wait for the evolution of these digital assets since, for many, even buying in the floor area; they are losing large sums of money.

WHAT WILL HAPPEN WHEN THE BITCOIN UNITS RUN OUT?