Latest Knowledge
What Is Office Hoteling Software? And How To...
Make Your College Experience Unforgettable: Top 10 Things...
8 Things to Include in Your Campus Visit...
What is it that makes Filmora the best...
Solve Wireshark Not Showing Interfaces Error | Easy...
The Most clever Complaints We’ve Looked into Zorb...
How Important is Web Design For Your Business...
Empirical Evidence and Consequences of Bitcoin as a...
Experts Share: The Secrets of Alcoholism Rehab
Why Everybody Needs Identity Theft Protection
Home Guide Color Of Vomiting In Dogs: What Does It Tell You?
GuideHealth

Color Of Vomiting In Dogs: What Does It Tell You?

Seeing your dog vomit is a standard sight for most dog owners. While it can be concerning and gross to see, dogs can vomit for a lot of different reasons, and it’s important to know these reasons so you react properly in the event it happens.

If your dog is vomiting, there is no reason for you to paniColor Of Vomiting In Dogs. Dogs are naturally curious animals, so there’s a high chance that they may eat something in the backyard or pantry that can cause them to vomit. Other times, just running around too much after eating can cause them to regurgitate.

When your dog vomits, the first step is to always examine the color of vomiting. While it might not be the best sight, it’s very important to look at the color and texture of your dog’s vomit to give you a rough idea of the potential causes and what to do.

That way, if you need to call the vet, you can give them a detailed and proper explanation of the situation. And when it comes to examining your dog’s vomit, color is one of the most important qualities considered.

You can learn a lot from the color of vomiting of your dog, such as the potential causes of their condition. So, in this guide, we’ll be going through the common colors of dog vomit and what they could mean for your pet.

Why Do Dogs Vomit?

Dogs can vomit for a wide number of reasons, just like humans. Sometimes, it could just mean they ate too much, too fast. Other times, it could be evidence of an underlying health condition. While most commonly, dogs vomit because they ate something they shouldn’t. 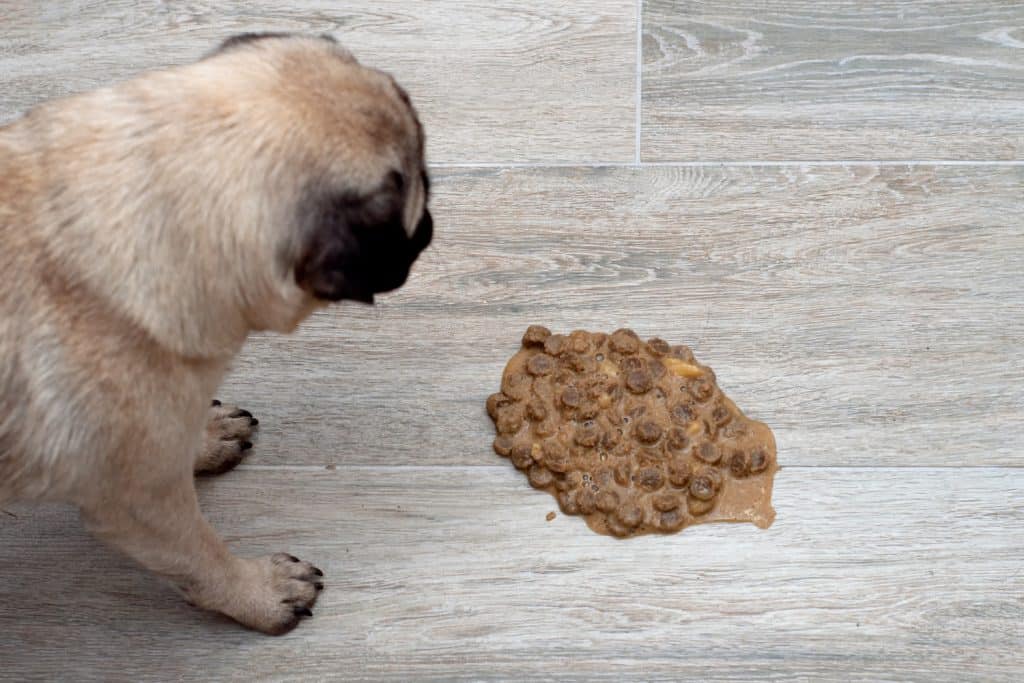 Since dogs can vomit for a wide number of reasons, seeing it happen shouldn’t be a cause for panic. However, since this can also be caused by underlying health conditions, you shouldn’t take it lightly as well.

One of the best ways to determine why your dog is vomiting is to retrace its steps. Try and find out where they could have been during the day, what they were doing, and if they could have ingested something they shouldn’t have along the way.

And to get a more accurate view of why your dog is vomiting, you can also give it a close look like the color and texture of the vomit can explain a whole lot.

Color Of Vomiting In Doings & What It Means

So, you caught your dog vomiting?

Before cleaning up the mess, make sure to give the vomit a close look. While it might be a gross thing to do, it’s absolutely necessary as it gives you an idea of what’s causing them to regurgitate.

To make it easier for you, here’s a quick list and guide to what it means when your dog vomits a specific color.

White vomit may cause some dog owners to panic since white foam around the mouth is a symptom of rabies. However, the most common reason there’s white foam in your dog’s vomit is that their saliva mixed with the air, which created bubbles. If your dog vomited on an empty stomach, this could also be a reason for the foam.

The most common cause for green dog vomit is your dog eating grass. Dogs who spend a lot of their time in the garden are very likely to eat grass, which their stomach can’t handle, which is why they throw it up. However, if the vomiting was caused by grass, you will also likely see plant materials mixed with the vomit.

Another, more serious cause for green vomit is bile. If bile is present, it could indicate that your dog threw up on an empty stomach, which could be a sign of acid reflux or gastrointestinal problems. If you don’t see any plant material and suspect your dog is vomiting on an empty stomach, contact your vet immediately.

If your dog throws up brown and chunky vomit, take a look and see if there’s any kibble in it. If your dog eats brown kibble, this could be a reason their vomit is brown. However, keep in mind that dogs tend to eat other dogs’ feces, which could be the unsettling reason their puke is brown.

Another reason the vomit may be brown is because of blood present in the vomit. If you suspect that there is blood mixed in with your dog’s vomit, make sure to contact your vet immediately.

Must Read:CBD Oil for Dogs with Arthritis

Just like brown vomit, red vomit is usually caused by your dog’s kibble. So, before you go on panicking, make sure that your dog didn’t just throw up some kibble that they ate too fast. Dog treats and kibble contain red food dye, which can cause their vomit to appear red.

However, red vomit could also mean that there is blood in your dog’s vomit, which requires immediate veterinary attention.

If your dog has clear vomit, that probably means there’s nothing in their stomach. If your dog vomits on an empty stomach, that means that it was caused by something other than what they ate. This could be acid reflux or other health issues, which are usually accompanied by other symptoms.

If your dog vomits once then appears fine after, they probably ate something they shouldn’t have or run around too much. In this case, you won’t need to call a vet or take further action, though you might want to make sure your dog doesn’t eat things they shouldn’t.

However, if your dog is vomiting and exhibiting other symptoms or is vomiting multiple times throughout the day, you may want to call your vet to stay on the safer side.

What Skills to Highlight in Your Game Design Resume